This document provides information on using the Ruby SDK.

The SDK has two main functions.

If you want to specify and use a user identifier yourself, please check the Managing User Identifiers document.

Sequence of SDK Integration and Configuration 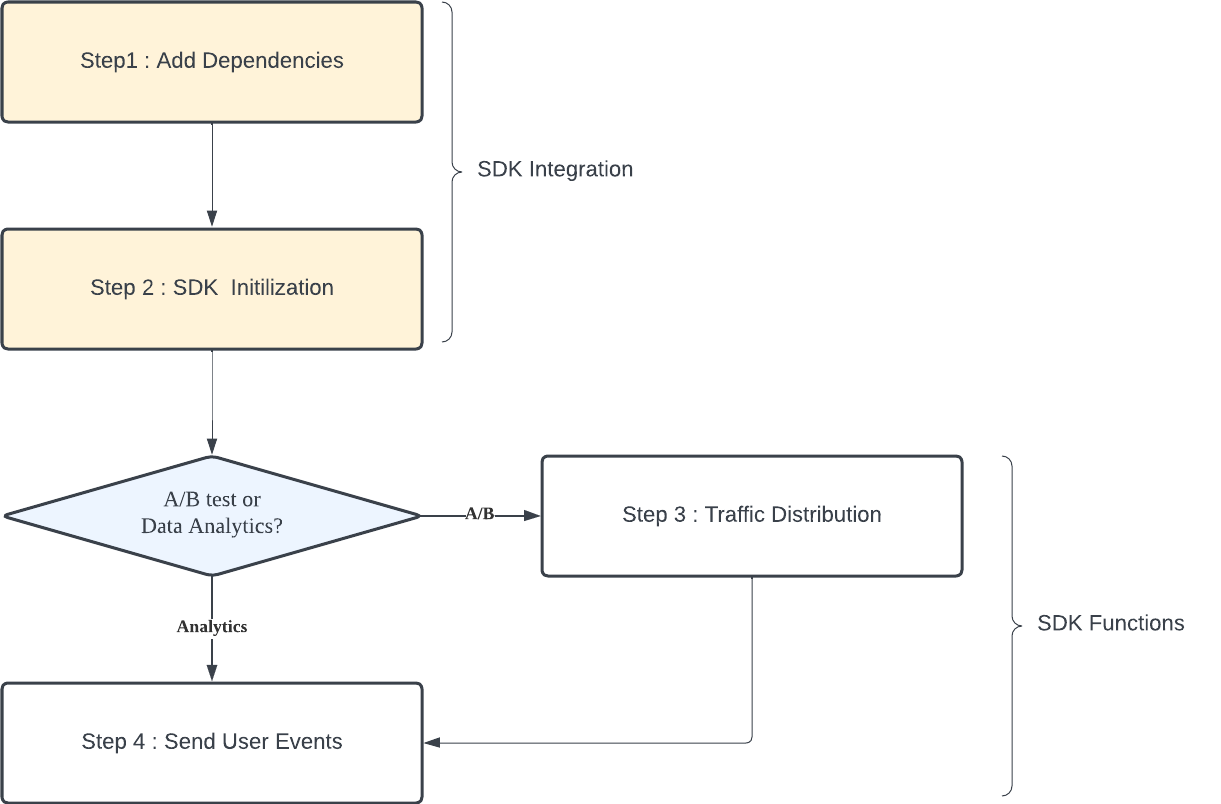 SDK integration is required to apply the SDK functions.
This applies to steps 1 and 2, and must be passed during the initial integration phase.

Depending on whether the purpose of Hackle platform integration is forA/B testing or Data Analytics, there are differences in the SDK functions that need to be applied.

Think of this step as importing our SDK into your codebase. To use our Hackle services add the following dependency code and import our SDK.

Once you have imported the dependencies, in order to start using the Hackle SDK you must initialize the SDK. During this step, we get the information needed for SDK integration from the Hackle Server and store it in the SDK.

hackle_client is a class that provides methods for using SDK functions.

The SDK key can be found in the SDK integration in the dashboard of Hackle service.

Instantiate hackle_client by passing the SDK key.
hackle_client periodically synchronizes with the Hackle server as a background task to constantly obtain the necessary information.

hackle_client must be a singleton pattern

hackle_client manages the status internally to distribute traffic into test groups right away without blocking the calling thread. It uses additional resources for this. Instead of instantiating a new client for every request, it should be managed as a single instance throughout the application lifecycle.

If you want to use the SDK in your Rails application, you can configure hackle_client through the code below.

You can access hackle_client through the code below in the controller.

When the application starts, the SDK creates multiple threads. Each thread has an infinite loop that batch processes and dispatches events in the background and fetches A/B test information. If the SDK is used on a web server that creates multiple child processes (eg Puma, Unicorn/workers> 0), the application server creates child processes but does not re-create the threads existing in the parent process. Therefore, when running in cluster mode in Unicorn, Puma, etc., the SDK must be additionally created after a child process or Worker is created.

Unicorn
If you are using Unicorn in cluster mode, the settings below should be added.

Puma
If you are using Puma in cluster mode, the settings below should be added.

This step is for A/B testing only.
Distribute users to test groups in each specific experiment key, and write the logic for each test group.

By passing the experiment key and user identifier to the variation() method, you can distribute users and receive the results of the distribution. After that, you can implement the logic for each test group.

The experiment key is a unique number for each A/B test and can be found on the dashboard within the Hackle service.

In the example code below, we are passing an experiment key of 42, and there are two test groups, A and B.

If you use Backend-side SDK, Any successive Exposure events within one minute for same A/B test from single user will be counted as one.

User events can be sent by passing the event key and user identifier to the track() method. In cases where you would also like to know the value, you can put a numeric value in value and send it together as user events.

Look at the example below.